Dear Optimists,
I love when my work day starts early. Is that gross to you? Disgusting? Unfathomable? Well, shut up because I like it. 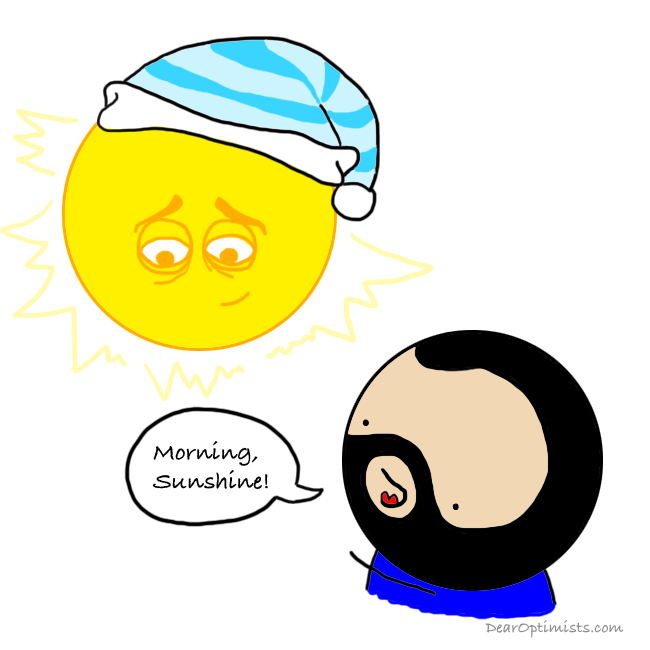 This semester on Mondays, Wednesdays and Fridays I have an 8AM class. Yes, it hurts to get up. Yes, I have to plan ahead and try to fall asleep early.

But it’s so wonderful to get out of work and still have so much of the day.

Driving home from the mall (yes the same mall trip I wrote about yesterday) I looked in the car next to us and it was full of old people.

No, that’s not the funny part. The funny part was that in the back seat a little old lady was sitting on another old lady’s lap. The look on her face was one of misery. Although the one on bottom was laughing. 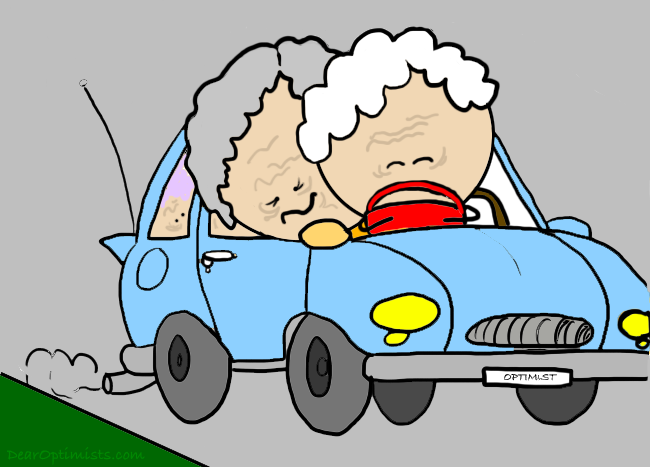 A story about our encounter with a father and son bonding over my favorite thing in the world: Legos.

If you read this blog at all, you already know I have a bit of an affinity – oh heck let’s call it what it is – an obsession with Legos. Well, this past weekend I had a $20 gift card to Toys-R-Us and wanted the cool Creator Log Cabin and was in the aisle looking for it when I saw a father/son by the little bagged figures. Do you know them? They’re in a bag and you have no idea which one you get. It’s fun and I definitely buy them when I see them on sale. 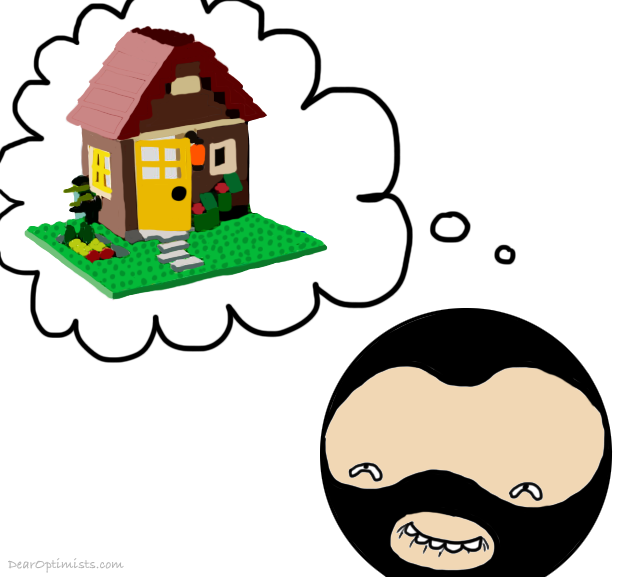 So I walk into the aisle and this father and his son have about twenty of the bags laid out on a shelf. I quickly figure out they’re going for the Feel the bag and guess which one is in it theory (which seldom works…I was trying to get the monkey trainer for the longest time but apparently the girl-hair part feels like a monkey), so Elle and I joined them. I wanted her to see the new series (she pretends to care because she loves me). 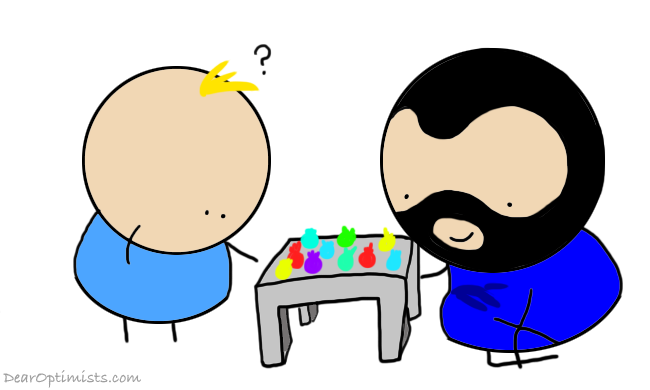 I said to Elle, “I really want the robot.” The little kid, who had thick glasses, looked up. The dad laughed. “That’s the one we’re trying to get!” “I can understand that…it’s the best one.” “We also want the leprechaun” the kid said to me. We had a little talk with them and I admitted it took luck to get the monkey trainer (yes, I did finally get it) and we had a nice talk with the kid and his dad. It really warms my heart, seeing a moment like this. The dad and son, working together and chasing down these toys, it’s one of those memories the kid will have forever. I hope to be that dad someday.

They ended up in line behind us as I was buying the log cabin (yup! got it!) and as we walked to our car I heard a voice say “Excuse me!” from the van next to our car. I look over and it’s the kid in the back seat.

“We got the robot!” he yelled. His dad and I both laughed, and I said “That’s awesome. I’m jealous now!” 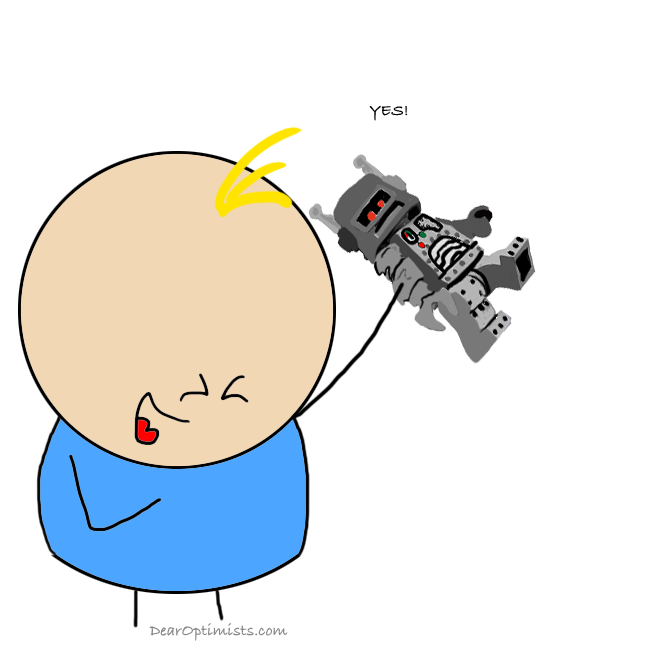 What a trip to the toy store, huh?

We all spend some of our time wishing, right? Some wish they could fly, some wish they would meet their special someone, everyone has a wish.

I’ve been trying to think of something I could wish for. Weird, right? I should just know. Am I that optimistic that I love my life, as is? I have to try harder. Let me think…

…okay I have it. I wish I were a often-read author. I wish I could go out to a table at a book signing and there are a hundred people waiting to meet me. No, wait, a thousand people. And the publisher would send me on a worldwide tour, all-expenses paid, that stops in some amazing, beautiful countries…Denmark (so I can meet Nadia), England, France, Spain, Iceland, Italy…wherever. There…that’s my wish. 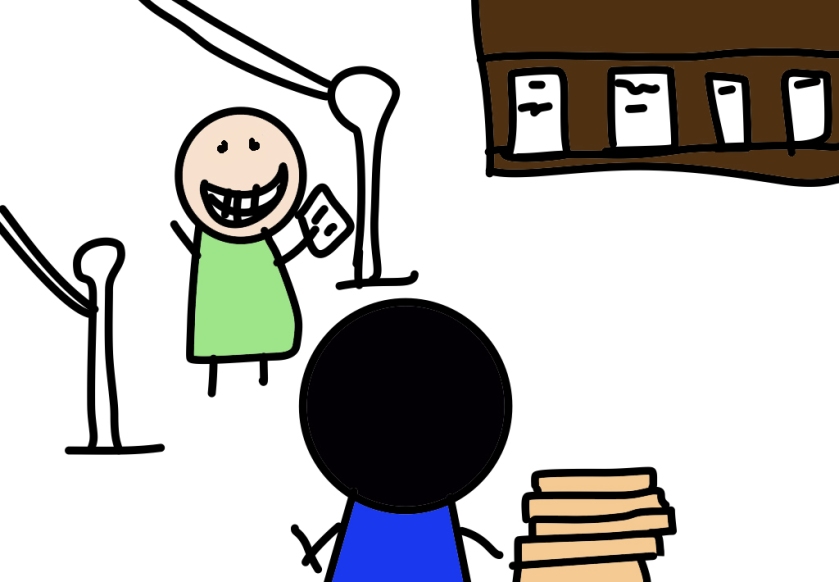 It’s funny when people underestimate your age. I personally like it, but it gets so awkward when people over-underestimate it! I’m 21 already, but have got myself mistaken as a 12-year-old a lot; dozens of times actually!!

I will never forget two years ago, while shopping with my mom, a man of my father’s age came by and asked me to try a jacket… he said, “Would you please try this? It’s for my daughter, she’s of your age, 12 years.” Then he patted my shoulder, thinking I was a 12-year-old kid!! I swear, I couldn’t utter a word; I silently pulled myself out, leaving him wondering what his mistake was! My mother couldn’t stop laughing when I told her!! 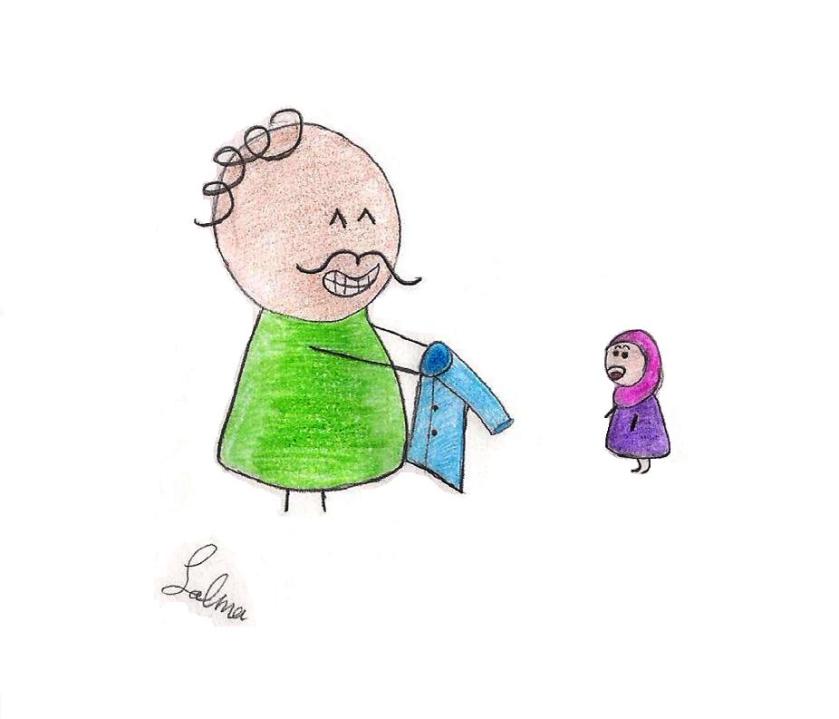 I also remember when I missed my flight last year and the woman at the check-in desk called the plane crew telling them they have left a 12 year-old child alone at the airport!! 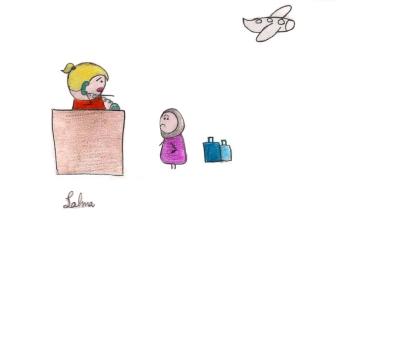 Sara of The Accidental Blog

P.S: My sister insisted on drawing me that tiny; she’s younger, yet taller than I! If I were good with drawing I would’ve drawn myself taller!

Last week the gal and I were driving to a friend’s house for a little get together and the sun was setting, creating this really cool shadow of us in front of the car. I had to point it out to her.

“Look at how cool our shadow looks!” 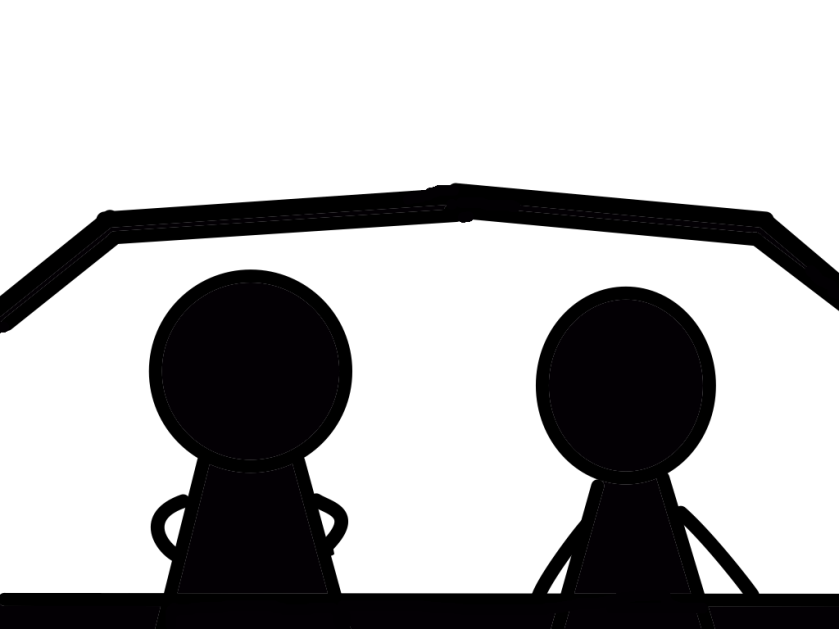 As she looked I decided to wave. She giggled. 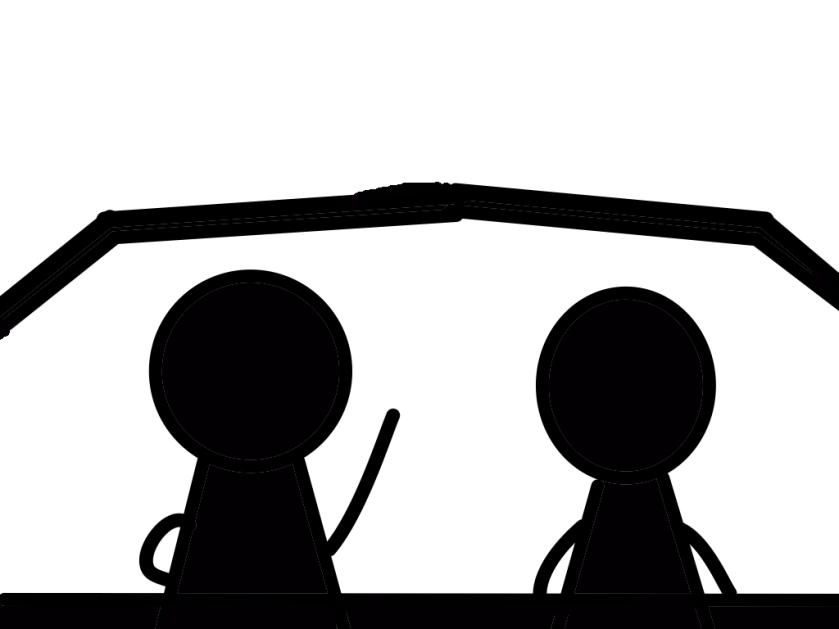 There’s nothing like watching a horror movie in the early morning as I eat breakfast before work. Here it was, 6:30 A.M. and my television ends up on one of my favorites, 28 Days Later. I ate Cheerios with little banana pieces as I watched bloody, disease-ridden people try to eat other people. 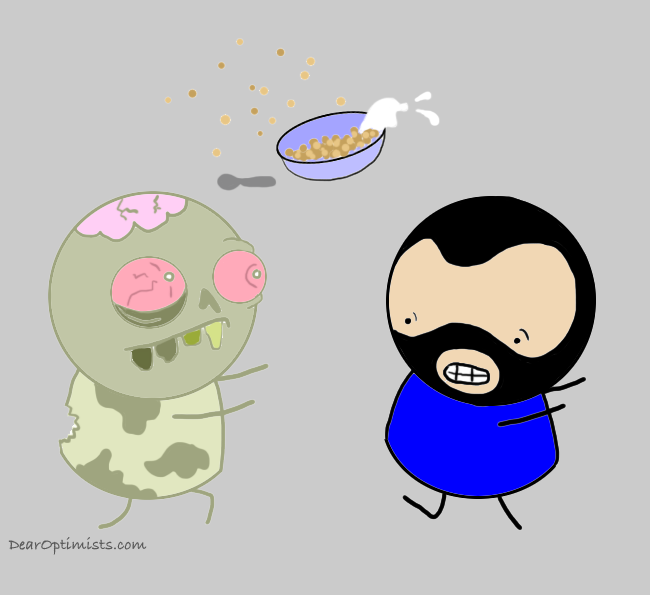 The longer I work on this blog, the more I wish I could speak/write Danish. Since a large percentage of our readers are from Denmark, it just seems like something I wish I could do!

That, and sometimes I worry that my Danish friends on Facebook are saying stuff about me right in front of me and I don’t even know it. Especially since my name is actually a Danish word…

P.S. Why do I have a weird feeling that our Danish readers might respond in Danish just to make me more paranoid? 😉 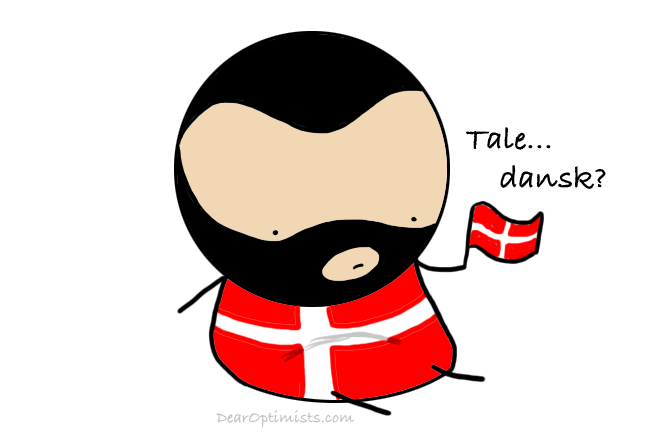 The other day I was walking down the street and this guy was carrying these giant bundles, one in each hand. From afar I recognized the sheer size of the bags and that they were a yellow meshy material, but as he got closer I saw that each bag contained nine smaller plastic bags of peanuts. 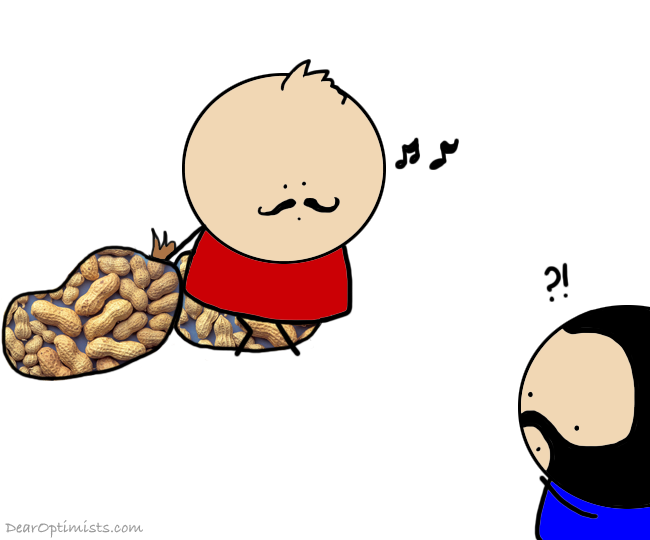 “What, do you have an elephant as a pet or something?” I joked. 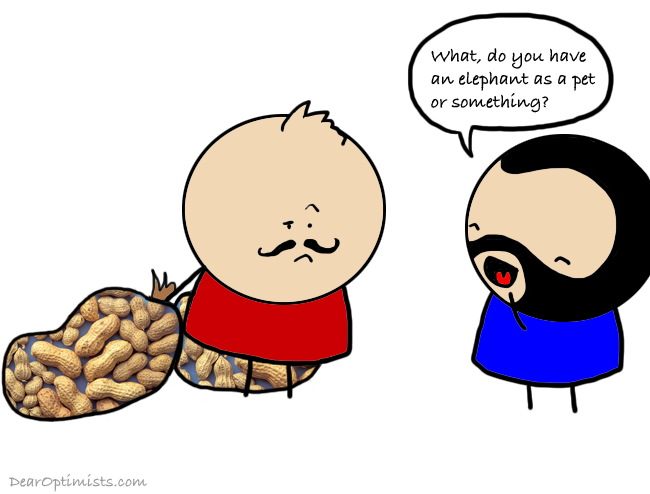 He gave me a dirty look. Some people have NO Sense of humor. 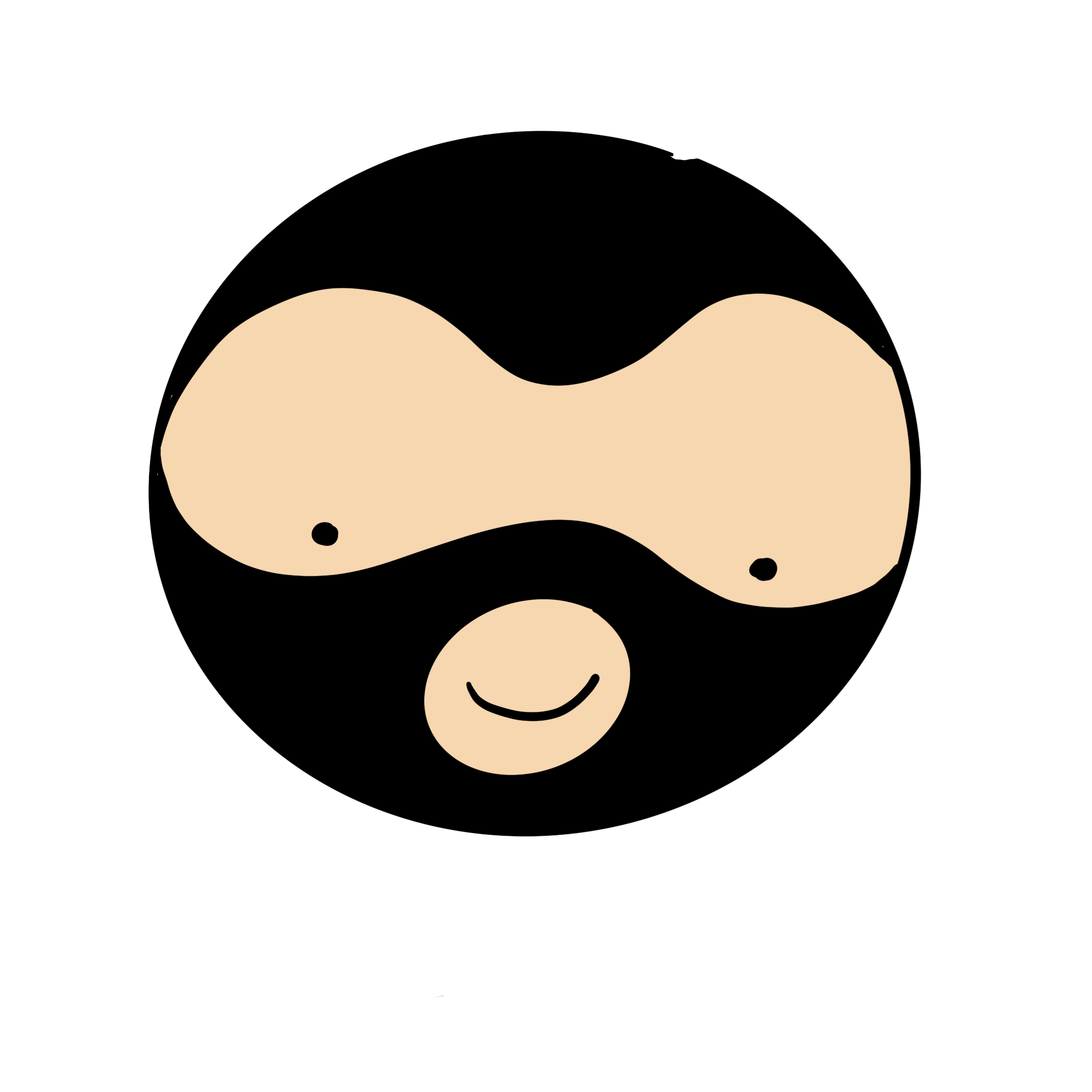 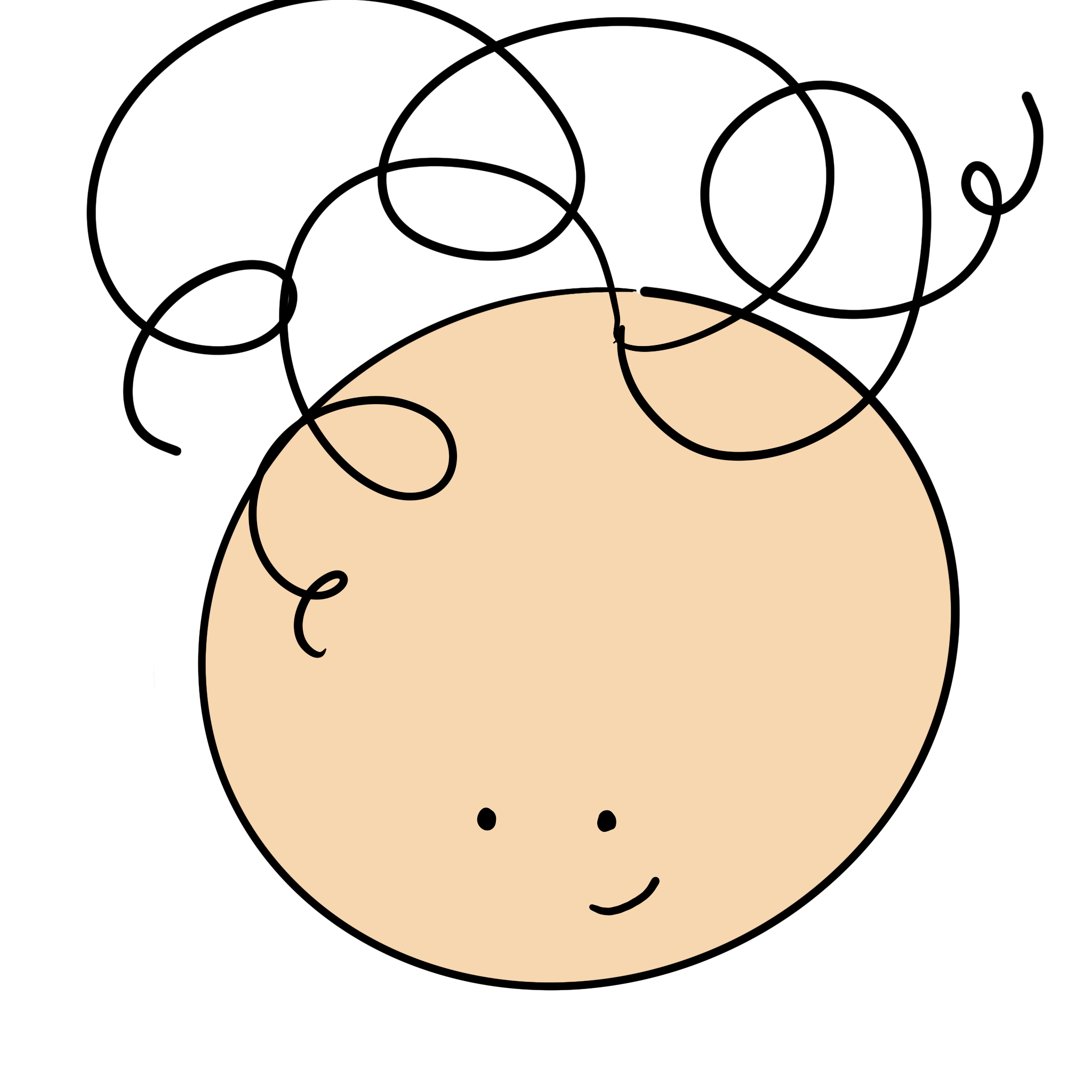 It's not very optimistic to steal, but feel free to share the optimism by using our illustrations and stories as long as you remember to link back to us - you could end up saving a pessimist!
Create a free website or blog at WordPress.com.
Loading Comments...