It was just a regular morning and I was going to work. I work in Makati and it’s sort of the Business City where tall buildings and office people are everywhere along with Starbucks and other coffee shops; All I get to see are busy roads and pavements.

I was walking, holding my umbrella on my right hand and fanning myself with my left when I suddenly saw a stray cat sitting along the wall of a Starbucks, apparently observing us “people” walk and rush to work.

Next thing I saw was a man holding a rooster and examining it (checking if it was good, I guess?!), when suddenly the rooster crew! I laughed so hard. The man did not know what to do so he closed the beak in alarm, because the rooster didn’t get to finish what he crewing. Hahaha!

Was it just a morning of odd animals or was it a sign?

Have a nice morning. Watch our for weird animals!

It was the day before Thanksgiving 2010. The older adults were preparing tamales. Myself, my little sister, my cousin and my cat Nemo (I brought him since I was staying until Christmas) were assigned watch over the children. Seven children in total: Girl(7rs), 2 Boys(4yrs), Girl(4yrs), girl(3yrs), girl(2yrs), and one harmless sleepy baby boy. You would think three people could handle them but they got into some jealous bouts between the girls, and one boy was extra aggressive. While we three fought to gain control of the five toddlers and one older girl, who let us know very kindly that we were doing everything wrong, Nemo sat on the stairs glaring down at us. One of the kids saw this and, clearly spooked, walked away from him.
I then had an idea.

“Kids! If you do not listen and behave, Nemo will eat you!” 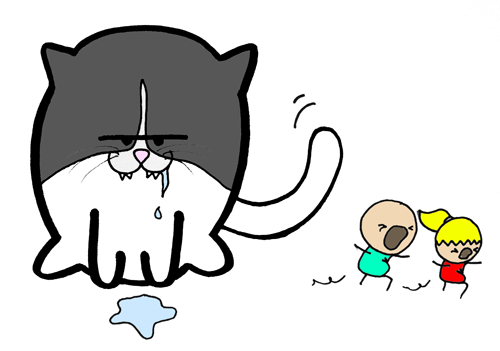 I know some might think this disturbing, but the kids laughed and all agreed to be good, thinking me silly. My cat, on queue, climbed down the stairs and rubbed himself against the most naughty child, the aggressive four year old boy. He looked at me with frightened eyes and declared that he would behave. Nemo did not leave my side the whole day.

The three year old girl began to take everything she could from the others and walk, with all this stuff, to a secluded room. Nemo followed her into the room (as this was the room his food was kept in) unbeknownst to her. I heard a cry echo through the hall and ran to go see what the problem was. Nemo was rubbing his body on her legs and she was yelling that he was trying to eat her. I rescued her saying: “It’s okay, Nickie,” I then said in front of all the children, “Are you going to give the toys back and start behaving?”

The kids just stared, and the rest of the night went smoothly as I sat back, cat in my lap watching toy story 3 with six well behaved kids.

I used to have a cat. Like many others, really. He was the cutest thing in the whole world, and he thought the same of me. But sometimes he wasn’t all that adorable.

Feivel used to sit on the door (yup, on top of the door). It was his favourite spot.

However, it didn’t take him long to conceive a terror plan. He was one of those cats.

What happened next doesn’t come as a surprise:

You’d think I’d learned, but no. Every time I entered my room I was greeted by Feivel this way. Awesome cat. May he rest in peace.

Now to the CONTEST!
Answer following question in the comments by Friday and we’ll draw a winner on Saturday! The winner will receive a virtual Optimist drawing of him-/herself!

Two cartoon sounds were used in this post. Wherefrom do these sounds originate?

Leave your answer and remember to add your email, so we can get a hold of you!

It's not very optimistic to steal, but feel free to share the optimism by using our illustrations and stories as long as you remember to link back to us - you could end up saving a pessimist!
Loading Comments...